The Gaither Cemetery is found on private property in Southern Baxter County.  Take Push Mountain Road to the South from Norfork for about 15 miles to the intersection of Baxter CR 73 (Culp Road).  Turn left on Culp Road and go about 6 miles to the intersection of Baxter CR 128.  Turn left on Baxter CR 128 and go about 1 to 1.5 miles to Berrybrook Ln. on the left.  This is a private drive with a red street sign.  Follow Berrybrook Ln. about 2/10th mile to the gate.  After passing through the gate, look for the second recognizable pull off area on the right.  From here, you can look through the wood line and see the small cemetery. 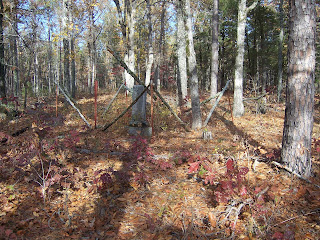 The small Gaither Cemetery as it appeared
in early November, 2012.

The tiny Gaither Cemetery is enclosed by a wire fence.  There is no sign.  There is one tall upright gravestone that is for G. B. Gaither (11-24-1834 to 06-11-1904).  He is the father of Jane Hamby Gaither.  The stone is worn and eroded.  Outside of the fence at the base of a large tree a short distance away is a memorial stone for David Wayne Woods (1955 - 2004).  Information indicates that Mr. Woods desired to be buried in the Gaither Cemetery but that his wish was not permitted because this cemetery was not properly "registered" as an existing cemetery.  The family placed a marker here anyway in his memory. 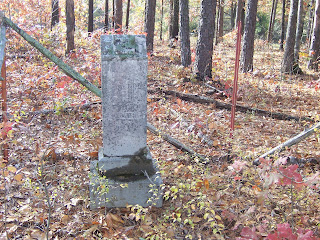 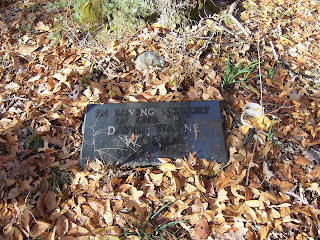 This memorial marker for David Wayne Woods
is outside the fenced area.  Mr. Woods is buried
elsewhere, but the family placed the marker here
in his memory to honor his wishes.