Athens Cemetery is near Bennett's Bayou off Baxter CR 46

The Athens Cemetery can be accessed from Baxter CR 46, just North of the "Bennett's Bayou" backwater area of Norfork Lake. From Mountain Home, take U. S. Highway 62/412 East, across Norfork Lake and through Henderson, to the intersection of Baxter CR 46. Turn left (North) on CR 46 and follow it several miles until crossing over the Bennett's Bayou Bridge. Just across the bridge on the right, you will see the Athens Cemetery "arrow" sign pointing to the direction of the cemetery. This was also called Killridge Trail, but I believe the sign now says Athens Ln. Follow this narrow dirt road to the end, bearing to the right. The cemetery is at the end of the dirt road adjoining an Arkansas Game and Fish Commission Wildlife Management Area. 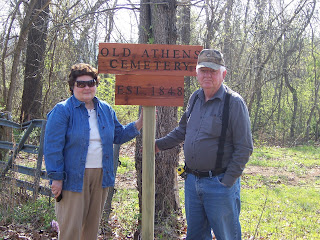 A new cemetery sign was made by the
Sheriff's Office and placed at Old Athens Cemetery
on March 28, 2012.  Pictured are
Mr. and Mrs. Wayne Clinkingbeard.

This cemetery dates from the mid 1800's or earlier. It is no longer active, but not abandoned either. It appears to be mowed and semi-maintained on an irregular basis, probably by surviving family. The last burial probably occurred in the 1940's.  The fence line was cleaned up and some brush and downed limbs were piled and burned in the Winter of 2011 by jail inmates at request of some of the family members. 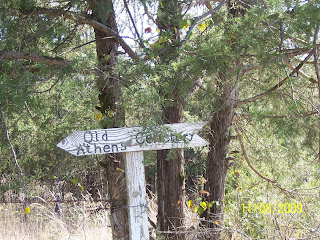 Sign pointing the way to the Old Athens Cemetery 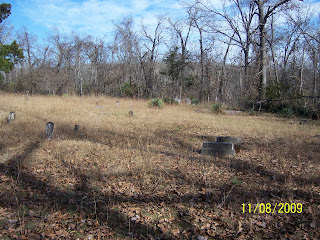 A view of Athens Cemetery in the Fall of 2009 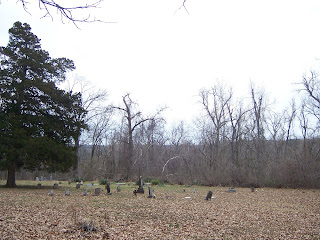 Athens Cemetery as it appeared in the Winter of 2011
Posted by Jeff at 2:46 PM