There is a possible, but unconfirmed, gravesite for Mary W. Fort, 1846 - 1853, that is located on private property near the end of the former Baxter CR 622, which turns right off Shipps Ferry Road just before coming to the railroad tracks. This county road has now been abandoned by the County Court and turned over to the only property owner. The now private roadway is gated. Access is by permission only of the property owner, who has a residence at the end of the road near where the lone engraved headstone is located. The property owner found it face down in the mud and overgrowth several years ago when clearing the land.

There is debate over whether this is actually the burial site of Mary W. Fort, or whether this is merely a gravestone marker that somehow became lost or left behind at this location at some point in time following her death.  Local folklore says the 7 year old girl drowned in the White River near "Shipps Landing".  Other sources state she died while traveling with her parents down the White River and was buried in this spot.  Still other sources believe she is buried in the Hillcrest Cemetery in Holly Grove, Mississippi with other members of her family.  This particular belief is founded upon that fact that there is another, separate gravestone for her that has been placed in that cemetery, however some believe that particular gravestone was placed only as a memorial marker many years after her death and that her remains are not in that cemetery.

I do not believe there is sufficient evidence to conclusively establish either of these possibilities as truth and fact. 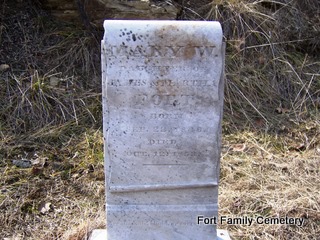 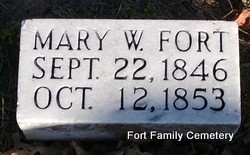