The remains (or lack of remains) of the Old Trevina Cemetery are located on the left (East) side of the Dr. Z. T. Sheid Bridge, just before it crosses over the White River on Push Mountain Road near the City of Norfork. The cemetery originally covered 3/4 acres but was unfortunately and sadly bull dozed and cleared for pasture land many years ago. I was told that the few remaining stones were pushed over by the railroad tracks.  The cemetery was abandoned as soon as the Norfork Cemetery was opened. There are said to be around 100 graves in this cemetery. Most of them were marked only with native field stones. Only one clearly distinguishable upright field stone remains standing today. It can be found between two trees in the middle of the pasture. This stone has some scratches visible, but nothing is legible. The Baxter County Cemetery Book gives the names of four (4) persons known to be buried here in the mid to late 1800's. The book also indicates that the name "Ma Graham" was barely visible on the one remaining headstone in 1989, but was not visible during my inspection in 2010, assuming this is the same stone, which it may very well not be. This location was also the site of the Mount Pleasant Church, or Adams Church, as was once named. 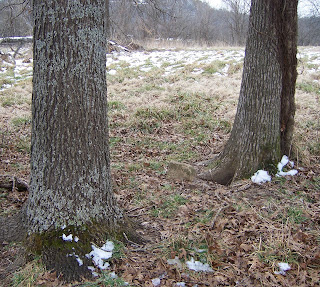 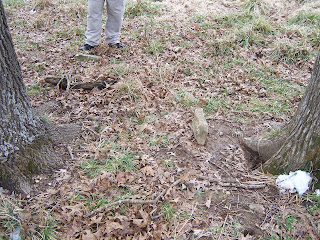 Another view of the upright field stone,
obviously placed in that position and location,
and probably marking a gravesite.
Note:  A placemark on an small, old cemetery map I saw puts the Old Trevina Cemetery on the opposite side of the White River, but everyone I have spoken with who knows or knew of the cemetery indicates it is/was located in the area I described above.

If anyone has any old photos or additional information for the Old Trevina Cemetery, I would very much appreciate an email concerning it.