This cemetery, known only as the "Jordan Area Cemetery", is believed to contain the burial site of two unknown persons. It is on private property owned by Mr. and Mrs. Mason. It is a short distance off State Highway 177. The graves are under a large tree located near the fence line. The graves are covered by large slabs of limestone. Mrs. Mason relates that she was told many years ago by Mr. Benjamin McClellan that the graves belong to two persons who were traveling through the area in a wagon train along the Old Jacksonport Road. They camped in the area, and two of their number died from illness. They were buried at this location and the graves covered by large limestone rocks. Their names and dates of death are not recorded. A small section of the Old Jacksonport Road is still discernible just to the West of the cemetery. 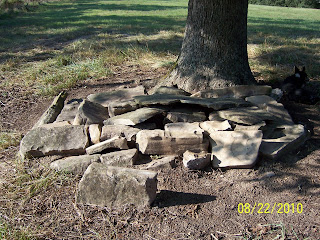 The Jordan Area Cemetery off State Hwy 177
Posted by Jeff at 1:51 PM