The remnants of the Messick-Young Cemetery are located on the Meadow Springs Apartment Complex at the North end of Church Street in the City of Mountain Home. The only remaining marked grave is that of James M. Messick (1842-1902). According to the Baxter County Cemetery book, there are at least 13 graves here by name from the Messick, Hargrave, Parks, and Young families, dating from the mid to late 1800's, with the most recent burial having taken place in 1915. It is believed that many other persons are buried here as well. Some of the graves may now be covered by areas of the apartment complex. 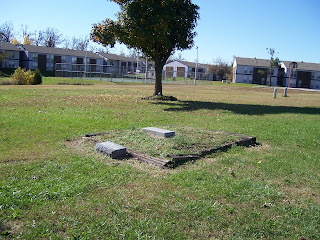 This is all that remains of the Messick-Young Cemetery 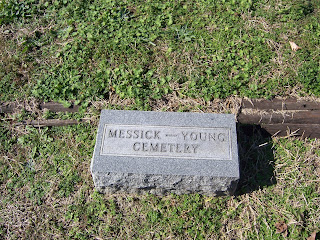 A marker identifies the Messick-Young Cemetery 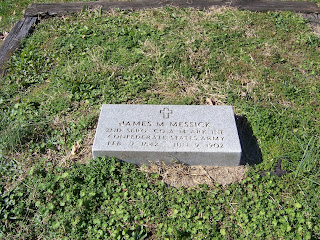 The only remaining marked grave is that of James M. Messick, a Civil War veteran.  This gravestone was set in place on or about October 14, 1992 by three of his great-grandsons, Jack Messick, Perry Jo Messick, and Leon Messick.  James Messick had enlisted at Yellville in July, 1861.  He was wounded at Corinth, Mississippi by a mini-ball in the chest, was furloughed home, and returned to fighting, only to be captured at Port Hudson, Louisiana in July, 1863.  This cemetery is located on what was once the Messick family's homestead and farm. (Info gathered from an article that appeared in The Baxter Bulletin on October 15, 1992.)
Posted by Jeff at 11:40 AM